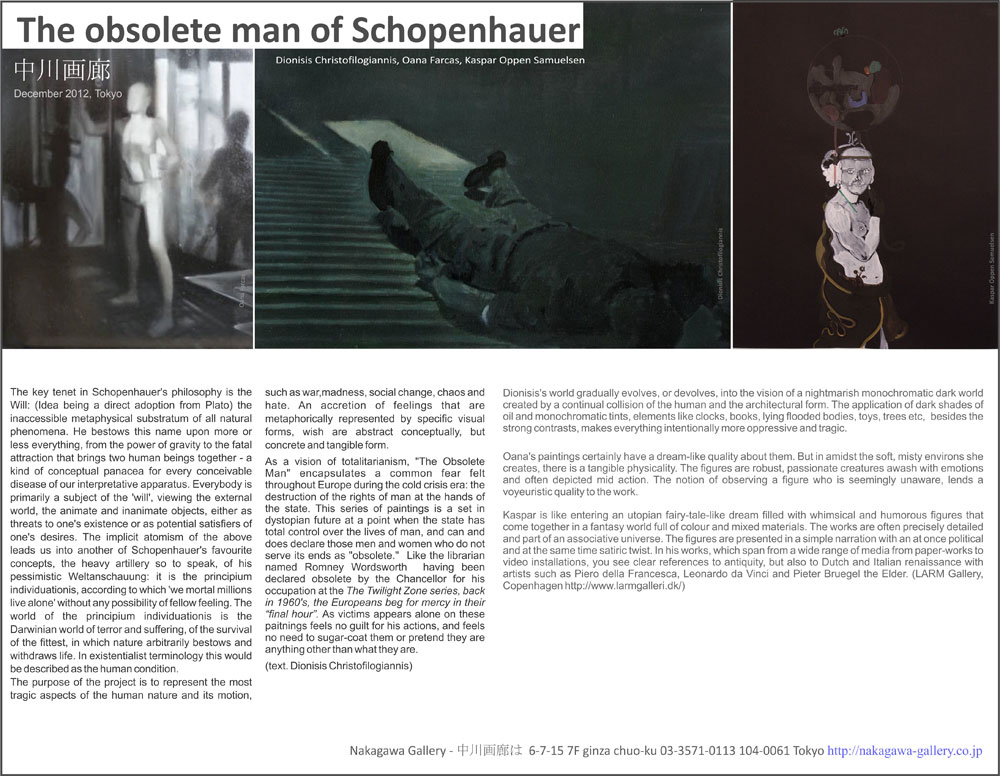 The implicit atomism of the above leads us into another of Schopenhauer’s favorite concepts, the heavy artillery so to speak, of his pessimistic Weltanschauung: it is the principium individuationis, according to which ‘we mortal millions live alone’ without any possibility of fellow feeling. The world of the principium individuationis is the Darwinian world of terror and suffering, of the survival of the fittest, in which nature arbitrarily bestows and withdraws life. In existentialist terminology this would be described as the human condition.

The purpose of the project is to represent the most tragic aspects of the human nature and its motion, such as war,madness, social change, chaos and hate. An accretion of feelings that are metaphorically represented by specific visual forms, wish are abstract conceptually, but concrete and tangible form.
As a vision of totalitarianism, “The Obsolete Man” encapsulates a common fear felt throughout Europe during the cold crisis era: the destruction of the rights of man at the hands of the state. This series of paintings is a set in dystopian future at a point when the state has total control over the lives of man, and can and does declare those men and women who do not serve its ends as “obsolete.”
Like the librarian named Romney Wordsworth having been declared obsolete by the Chancellor for his occupation at the The Twilight Zone series, back in 1960’s, the Europeans beg for mercy in their “final hour”. As victims appears alone on these paintings feels no guilt for his actions, and feels no need to sugar-coat them or pretend they are anything other than what they are.

Dionisis‘s world gradually evolves, or devolves, into the vision of a nightmarish monochromatic dark world created by a continual collision of the human and the architectural form. The application of dark shades of oil and monochromatic tints, elements like clocks, books, lying flooded bodies, toys, trees etc, besides the strong contrasts, makes everything intentionally more oppressive and tragic.

Oana‘s paintings certainly have a dream-like quality about them. But in amidst the soft, misty environs she creates, there is a tangible physicality. The figures are robust, passionate creatures awash with emotions and often depicted mid action. The notion of observing a figure who is seemingly unaware, lends a voyeuristic quality to the work.

Kasper is like entering an utopian fairy-tale-like dream filled with whimsical and humorous figures that come together in a fantasy world full of colour and mixed materials. The works are often precisely detailed and part of an associative universe. The figures are presented in a simple narration with an at once political and at the same time satiric twist. In his works, which span from a wide range of media from paper-works to video installations, you see clear references to antiquity, but also to Dutch and Italian renaissance with artists such as Piero della Francesca, Leonardo da Vinci and Pieter Bruegel the Elder. (LARM Gallery, Copenhagen https://www.larmgalleri.dk/)